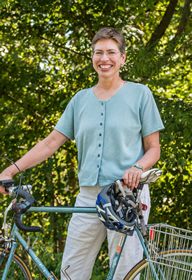 Sheila Simon rejoined the School of Law faculty after serving as Lieutenant Governor of Illinois from 2011 to 2015. Since returning to the school she has taught Property, Torts, Legal Writing, Advanced Real Estate Transactions, Children and the Law, Government Ethics, and a seminar on Crime Victims and Witnesses. As Lieutenant Governor she worked on many issues including education policy and secure funding for rape crisis centers.

In addition to her experience in state government and local government, Simon has been a long-time teacher at the School of Law, and was the first staff attorney for the Domestic Violence Clinic. Before joining the faculty, she was an assistant state’s attorney for four years, with two of those years spent prosecuting domestic batterers. Her civil law experience includes five years as a staff attorney at Land of Lincoln Legal Assistance, and three years in private practice. Simon is one of the authors of Legal Writing, now in its third edition.

Simon graduated from the Georgetown University Law Center in 1987, and from Wittenberg University in 1983. Ms. Simon is a member of the board of the Women’s Center, Equality Illinois, and Marcy’s Law Illinois.  She has served on a panel to screen federal judge applicants and been a pro bono attorney for the Association for Late Deafened Adults. She also served on the Carbondale City Council from 2003 to 2007.

Simon and her husband, Perry Knop, have two daughters, Reilly, who works in Washington, DC, and Brennan, a Peace Corps volunteer in Mongolia. Simon is a member of Loose Gravel, a bluesish band which can be heard locally, and on a 2004 cd which (she says) you would be lucky to get.